AI and robotics are creatin new kinds of work tasks and careers requiring human and high-level competence. At the same time, performative and monotonous tasks will decrease.

When talking about work life and the amount of work in the future, many share the common concern that machines will take jobs from people. The Talents Trends survey conducted by Randstad revealed that 44% of the respondents were worried that they would lose their jobs because of the development of AI solutions. An equal percentage of respondents felt like they could not keep up with the technological developments at their place of work.

However, there are numerous signs that suggest that AI will help increase the number of jobs instead of creating mass unemployment caused by technological development, making work more meaningful. Many who responded to the Talent Trends survey agreed: Out of the respondents, 55% believed that AI and robotics would improve their career opportunities in the future.

AI and robotics have already created new kinds of work tasks and careers, and the demand for professionals working with AI innovations is on the rise. This can be seen as an increased demand for STEM professionals in the job market. STEM jobs refer to jobs that utilise skills from disciplines of science, technology, engineering, and mathematics.

Many workers mention that developing skills related to AI, machine learning and data analysis is high on their list; 43% of respondents to Randstad’s survey said they were planning to improve these skills in the future.

In addition to mathematical prowess, social skills will be more emphasized in working places in the future. This can also be seen in the Talent Trends overview that shows that professionals think that the improvement of soft skills related to social interactions has become more and more important.

Few jobs can be fully automated

According to an estimation by the consultant company Gartner, in 2020 AI will create 2.3 million new jobs in the world while 1.8 jobs will disappear. On average, employment is estimated to increase annually by approximately 0.5%, thanks to technological advances. However, for many this means having to learn new tasks. According to an estimate by McKinley Global Institute, 375 million employees will move to a new type of a job by 2030.

One of the positive effects of the re-organisation of working life is the adding of meaningfulness to work; when machines take care of routine tasks, more time is left over for applied and creative work. This can also be seen in the responses to the Talent Trends survey. 60% of the respondents felt that robotics and AI had made their work more efficient and 57% estimated that their jobs had become more enjoyable through new technologies. In most cases, AI is utilised in different tasks to help human workers instead of replacing them. 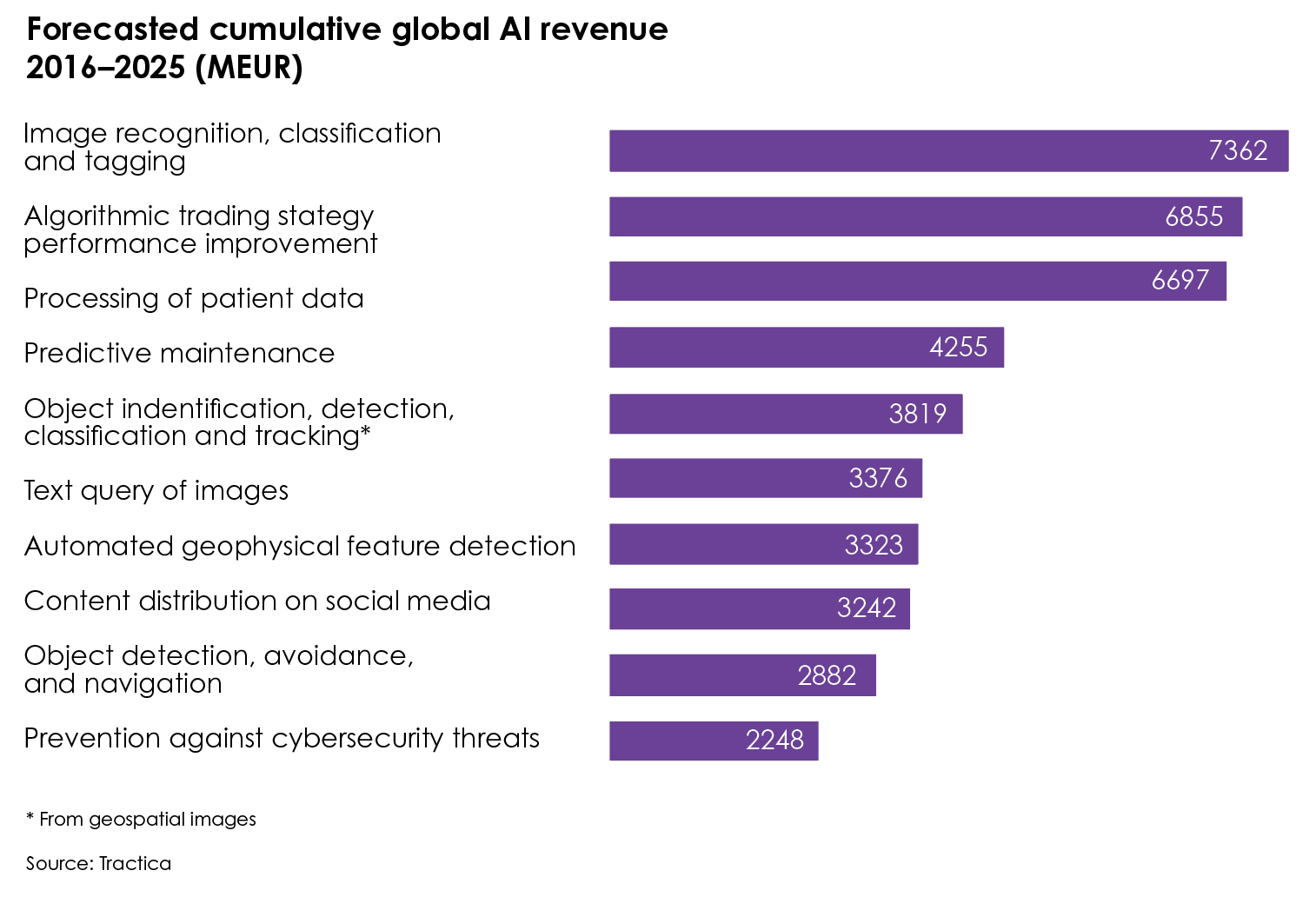 According to an overview regarding work in the age of AI published by the Ministry of Economic Affairs and Employment, over half of the existing jobs include some work tasks that could be automated. However, only about 5% of jobs could be fully automated. For example, many jobs in the field of logistics: It is likely that in the future fewer and fewer people will be employed as a driver. This menial task can be harmful to health and it will be taken over by robot cars, allowing human drivers to move onto more productive and, more likely, to more meaningful tasks.

In some fields, automation plays a significant role while also increasing the workload. An example of this would be many industries where automation makes the production process more efficient, lowering the prices of the end product. Lower prices boost consumption, as goods become available to a broader range of consumers. Increased demand creates new jobs on all levels of the value chain utilising automation.

More equality in the workplace

AI might also help make the workplace more equal. Research that compares choices made by humans and AI has shown that AI is less biased than a human - even when it has been trained using data that reflects human behaviour. For instance, in recruitment AI has proven to be excellent in choosing atypical but competent candidates that might normally not be hired.

In human resources, new technologies are being utilised to appeal to suitable candidates and get them to commit to the job, as well as to make the recruitment process smoother. One of the tools utilised is a recruitment chat bot. Recruitment bots have already been utilised in Finland, as well.

However, it is unlikely that recruitment decisions would be completely outsourced to technologies in the future. Social interaction will play a significant role in human resources in the future, just like in work environments in general. Jobseekers are also aware of this: 36% thought that a face-to-face job interview was the most important single factor in creating a positive employer image.

As we look to the future, technology and humans seem to walk determinedly side by side - or even hand in hand.

AI in a nutshell

• The term AI refers to a machine or a software that aims to mimic human consciousness.
• AI is not just one technology, but it includes a number of different methods, technologies, applications and research branches.
• AI is often connected to other fields, such as philosophy, cognitive, language and neurosciences, mathematics, physics, engineering and computer science.
• Among other things, AI solutions are utilised in industry, marketing, data mining, speech recognition, learning, planning, problem solving, games, medicine, finance and transportation.
• Amazon, Google, Facebook and Apple are some of the biggest corporations in the world utilising AI. Among other things, they use AIs for search engine optimisation, speech recognition, customer behaviour analysis and user data organisation.
• Finnish AI research is internationally renowned. Research groups working in Finnish universities and research centres also include top international researchers.

"At the K Group AI solutions and analytics are utilised in all areas of the business, from the grocery trade via the building and technical trade to the car trade. We want to be able to tailor our selection to match customer demand and help our stores pick exactly the right products to best serve their current customer base. AI plays a significant role in this regard, facilitating daily activities at stores and building a better customer experience. This also helps us minimise waste!

Developing new, successful AI solutions requires many types of expertise, which also creates demand for new skills and thus new duties and job descriptions, and even new professions. According to my own experience, rather than getting rid of them, AI helps create jobs. The best end result is achieved when AI is used to assist the human. AI takes care of tasks involving calculation that humans are unable to do sufficiently quickly: for example, recommending the products that are best suited to the consumption preferences of our customers out of K Group’s current range of 200,000 products.

Repetitive and routine tasks are easier to replace with automation. This makes the work that our employees do more meaningful. While work at the K Group stores previously focused on cashier work, there is now more time to better maintain the selection and focus on more aesthetically pleasing presentation of products and providing customers with more personal customer service. Stores become places where customers come for varied experiences and human encounters. The best customer service experience comes from excellent personal service combined with good digital services.

I believe that in the future, AI will make our everyday lives easier; even now we already offer our customers many everyday tools that would not be possible without AI."

Minna Vakkilainen is Vice President of Analytics & Customer Data at the K Group. The K Group is a key customer of StaffPoint.